The Intrepid Sea, Air, and Space Museum was animated this past Tuesday night as Friends of IHES hosted their third annual charity gala. Organized by Faircom New York, this year’s gala theme was “Space” and celebrated the intimate link between Math, Physics and the exploration of Space. The gala was held in support of the French research institute IHÉS, which focuses on advanced research in mathematics and theoretical physics.

Before the start of the gala, VIP guests were treated to a private tour of the space shuttle Enterprise; guided by Intrepid Museum experts and Charles Simonyi, our guest of honour who shared his passion for flight, guests braved the chilly weather for this amazing, exclusive experience.

The evening began with a welcome by Marwan Lahoud, Chief Strategy & Marketing Officer at Airbus Group, and President of IHÉS and , and Antonin Baudry, the Cultural Counselor of the French Embassy. Charles Simonyi, a software executive & philanthropist spoke about his multiple travels to the ISS aboard Soyuz spacecraft. Simonyi is the architect of Microsoft Word and Excel, and founded Intentional Software, a company dedicated to developing knowledge processing computer software. His passion for science and space has led him to become the fifth space tourist and first ever tourist to fly twice.

Simonyi fascinated guests by speaking about his experience and preparations for his time in space, which included eight months of training in Moscow. Thibault Damour, Permanent Professor of theoretical physics at IHÉS, gave an interesting speech about the history of mathematics and space as well. His work has covered many topics in relativistic gravitation, notably black holes, binary pulsars, gravitational waves, and string cosmology.

The event featured a live auction with elite prizes including a trip to Burgundy, France, a sculpture of famous French mathematician, Alexander Grothendieck, and private chocolate and tea tastings, along with many other prizes.

Renowned French actor and philanthropist Jean Reno made a special guest appearance via video to congratulate his friends at IHÉS for their research and successful endeavors in mathematics and physics. 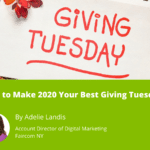 5 Ways to Make 2020 Your Best Giving Tuesday Yet

Giving Tuesday 2020 is assured to be one of the most competitive fundraising days of the year for nonprofit organizations. Here are 5 ways to make sure you stand out. 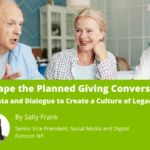 Discover the Why, Who and How of starting or growing a planned giving program. And why you shouldn’t stop even with the pandemic. 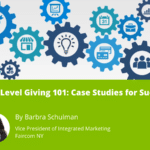 A healthy mid-level giving program is critical to the success of your overall program. Using a mix of different techniques across channels can help you zero in on the best cohort of mid-level donors – and then move them up the donor pyramid. 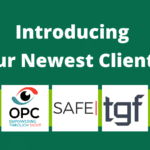 For over 25 years Faircom New York has been helping nonprofits raise funds to change the world. Today, we are proud to introduce our newest partners.
Menu